What are the existing forms of excavator slewing bearings?

The excavator is one of the most important equipment in modern engineering construction. The reason why the excavator can turn left and right during work is inseparable from the credit of the slewing mechanism, which is an important part of the excavator. 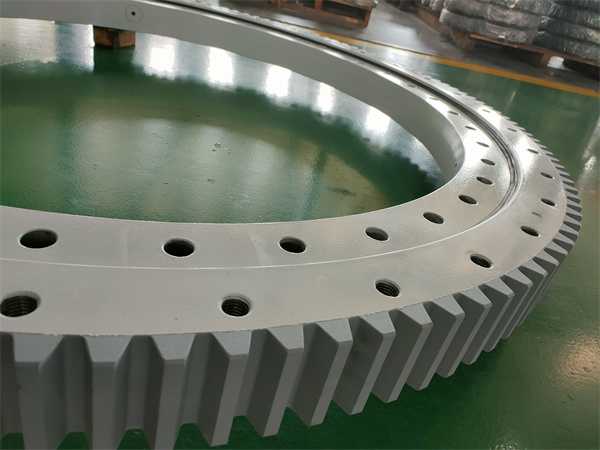 Rolling bearings are compared with ordinary bearings. Its speed is very slow, and the commonly used structural forms include single-row rolling ball type and double-row rolling ball type. The single-row ball slewing bearing is mainly composed of inner ring, outer ring, spacer, rolling element and upper and lower sealing devices. The steel balls are separated by rolling elements, and the inner ring or outer ring is processed into an inner gear ring or an outer gear ring.


The inner gear ring is fixed on the walking frame, and the outer ring is fixedly connected with the rotary platform. The slewing drive device is fixedly connected with the slewing platform, and is generally composed of a slewing hydraulic motor, a planetary reducer and a slewing drive pinion. Through the meshing transmission between the driving pinion and the ring gear, the rotary drive device revolves around the ring gear while rotating. Thereby, the platform is driven to rotate 360°.

When the excavator is working, the position of the resultant force of the dead weight and the load on the upper part of the turntable is often changed, and is biased towards the direction of the load. In order to balance the load moment, each device on the turntable needs to be reasonably arranged, and a counterweight should be set at the tail to improve the force of the lower structure of the turntable, reduce the wear of the slewing bearing, and ensure the stability of the whole machine.


As the rotational speed increases, the flow required by the swing motor also increases. When all the oil of the hydraulic pump is supplied to the swing motor, the first stage of start-up ends. The accumulator releases its energy at this moment, so the hydraulic pump and the oil in the accumulator supply the rotary motor together, which speeds up the rotation speed of the rotary motor. This is the second stage of startup.

The above is a brief introduction to the existence form and working principle of the excavator slewing bearing. It is hereby reminded that after the excavator has been used for a period of time, the slewing bearing is prone to noise, impact and other faults. The operator should pay attention to observation and check in time in order to eliminate Fault. Only correct and reasonable maintenance and maintenance of the slewing bearing can ensure its normal operation, give full play to its performance and prolong its service life.